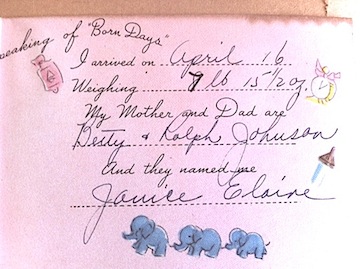 Mommies love their children so
To watch them laugh and cry and grow.
My mommy loved me very much
And I so enjoyed her gentle touch.
Now I’ve grown quite big and tall
In fact, I’m not a child at all.
I have a family of my very own
And in a few years they’ll all be grown.
I wish them happiness from this point on
Even after the day I’m gone.
I hope they don’t cry when I go away
For they talk to me each time they pray.

A doctor’s visit means so much to so many. For instance, today I see the surgeon who repaired my right leg with a titanium rod. He did his job and without ceremony today he will say good-bye. I’ve only seen him eye-to-eye on one occasion, a moment prior to unconscious, as I was then promptly put to sleep. Since the day of that surgery I have seen the x-ray of the orthoscopic operation. A mere view of the implant weakens my knees. Shelby refuses to view the image and Paige says, “Thanks mom” after I sent the email. I will never put it in the blog as leg x-rays aren’t supposed to look like that image. Non the less, I’ll thank and say good bye to a very important member of my medical recovery team.

My oncologist has a ‘happy face’ view for my recovery. The CEA blood count is 0.8 - that’s very good. My request to travel to Hawaii was met with a, “can I go too.” For just a moment I thought, ‘good idea.’  The chemo treatments are about to end for this period and I will switch to a oral pill form of treatment. Regular blood work will mandate the future treatment. It was discussed that my personal recovery is charting a new course and we can probably keep my health on this steady course. I’m already healthily outside the realm of probable recovery. That we will let my body mandate my awesome stabilization and treatment. Doctor Nishimoto commented on how one of his colleagues, who treated me back in my hospital days, remarked on how great I looked that he couldn’t have recognized me on his own outside the office.

My mind bounces back and forth between a ‘long future’ and ‘rap it up.’ Both are true. Don’t delay adventures and don’t delay mindfulness. This Saturday I’m spending a couple of hours with my cousin Sue who will be with her husband John for a modest visit at Long Beach Airport. From Long Beach they will return to Seattle to get on with their lives. I’m discovering just how important it is to look into the eyes and soul of someone you’ve known your whole life. Hey, Susie and I spent many hours sharing a playpen and toys. My mind and body know her as love and safety. We were only 2 months apart in age from birth. I didn’t become the bully until around age four, maybe five. I’m going to figure out a comfort plan for Skype and FaceTime.

Family, friends and future all seem to be connected as is finality. Today seems good, and I think that I’ll clean out part of my closet as well as part of my mind. I’ll also put up a scrolling photo image of my brother, sister and cousins into my mental iPhoto, album ‘family - old pictures.’ The family that gathered near while a grew up all learned the outer limits of grammar, words and punctuation. Yet they still love me. Dyslexic’s Welcome in Pop’s World.
Posted by Janice Held at 12:23 PM 4 comments:

Between every sunrise and avery sunset a full day flies by. When putting a group of days together you for a week then lifetime. I’m hearing a rumble that if I don’t blog with some regularity I might appear dead. If you know me my passing would be with great grandeur. Yet it truly brought to ming that I ought to keep friends informed.
I last left you with the red cell problem. Yet the depth of the issues was my white blood cell count was down to 1.1, and that is too low for chemotherapy. So doctor ordered me to stay away from any germs and live a quiet life. The white grew and the medicine was back.
The good news is also that I have a trip to Waikiki in front of me. Paige has offered a week long adventure to the warm Pacific shore. We’ll soak and float in the ocean. We’ve made three trips with them before so it’s very friendly. Having an adventure to plan might get me out of bed..

Sorry for being gone so long and as of today I’m actually feeling better. Adding iron has been a great idea. To Helen, Ginger and Patti - I’ll do much better with the news.
Read more »
Posted by Janice Held at 5:20 PM 3 comments: